The final quarter of 2022 delivered an early Christmas for investors; two consecutive inflation prints below expectations were seen as the prelude to the Federal Reserve (FED) adopting a softer stance in its monetary policy. Interest rates fell over the course of the quarter, and equities rose sharply. The excitement ended abruptly in mid-December when, in the course of the same week, the FED, the European Central Bank (ECB), and the Bank of England (BoE) all issued hawkish statements regarding the future path of the related benchmark rate. Interest rates rose and equities fell. No surprises here. 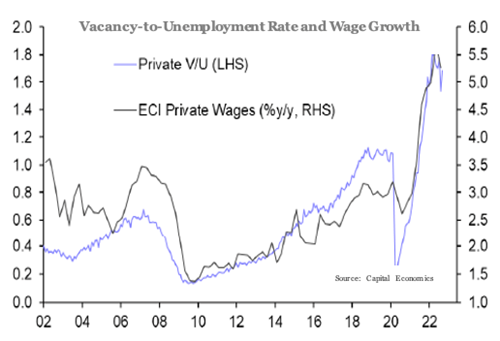 By now it should be clear that central bankers want to avoid a repeat of the 1970s, when a mean-reversion of the inflation rate prompted both monetary authorities and investors to get carried away, resulting in the former picking up pace and eventually skyrocketing. In the eyes of Mr. Powell and his fellow colleagues, financial conditions must remain tight for some time, certainly more than what markets are currently discounting. And the more financial conditions loosen due to markets propping up equity prices and pushing rates lower, the more we believe central banks will stick to their planned interest rate path, which envisages the latter peaking and stabilizing somewhere in H1/2023, depending on the region. Let me stress this point: peaking and stabilizing, not reverting.

The FED is behind the curve, no doubt about this. It has been behind the curve since 2021 when it first defined inflation as transitory, and it remains this way as it keeps a pushy stance while facing an economy that is decelerating, with inflation showing clear signs of normalizing. Thus, the probabilities of a soft landing are diminishing, and those of a recession taking place within 12 months keep rising.

Nonetheless, we remain confident that the recession will be mild in nature. Household balance sheets are sound, with the ratio of debt-to-disposable income close to pre-financial crisis levels. Secondly, despite the rise in mortgage rates has been impressive, its effect on the real economy will be felt more severely only in the future, as current contracts still benefit from the near-zero interest rate policy of the past. And finally, the job market remains extremely strong, as companies are unwilling to lay off staff as they expect only a small contraction of the future demand, coupled with labor shortages. Thus, as consumption decelerates, and although the saving rate is as low as it can be, de facto withdrawing key support of the past year, there are reasons not to panic.

The hurricane surrounding Europe and China we mentioned during our last report has gradually disappeared, taking many (including ourselves) by surprise. A milder winter has helped the energy crisis subside; the stock of gas is proving adequate and even energy-intensive Germany has avoided the specter of rationing. True enough, winter is not over yet…but it is a positive start. With energy prices falling, inflation has also peaked earlier than initially expected, although core inflation (excluding energy and food prices) remains elevated, urging the ECB to remain in a tightening mode. Still, the deep recession that we all (erroneously) forecasted is set to be milder, resembling what we are expecting from the U.S. economy. The Chinese economic reopening will further help set up a floor for how severe the downturn can be. 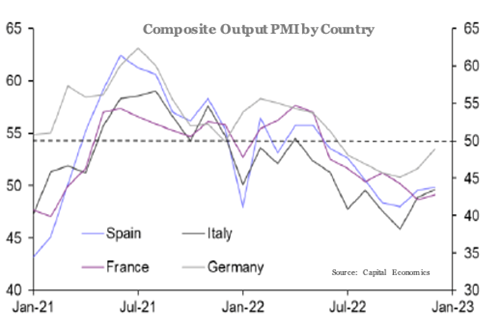 Speaking of which, China is suddenly COVID-free…if you need an example of what the unexpected looks like, here you have it; in the blink of an eye, the central government scrapped months of harsh policies aimed at keeping the virus under control, in favour of normality. The short-term effect is characterized by chaos, as people get infected and must (again) stay at home, harming global supply chains and lengthening delivery times. But over the longer term, it is clearly beneficial to economic activity, both domestic and abroad. The rebound will not be as powerful as what we have witnessed in developed economies because fiscal stimuli have been much more subdued, but the appreciation of the Renminbi that followed the reopening of the economy allows the central bank to further cut interest rates, which we expect to shore up the property market (> 30% of the economy).

FIXED INCOME: A rival of equities HAS EMERGED

The beginning of 2023 showed us investors have shrugged off the words pronounced in mid-December by central bankers and began discounting an earlier pivot in policy rates. Interest rate curves bull-steepened (although many remain inverted) as short-term rates fell faster than long-term ones, discounting a soft-landing. Accordingly, credit spreads tightened across the board, and emerging markets bond priced in hard currency rose as well.

Despite the strong start into the new year, we still believe bonds are attractive both on relative and on absolute terms. At the risk of sounding repetitive, investment grade companies show very healthy balance sheets, with plenty of cash and low interest rate expenses. With credit spreads still high compared to the 10-years average, investment grade bonds are a screaming buy, especially the shorter maturities given the curve inversion. Within the same rating exposure, but jacking-up the risk substantially, we consider hybrid corporate bonds as attractive too; they offer compelling yields in return for being exposed to the lower tier of the capital structure. 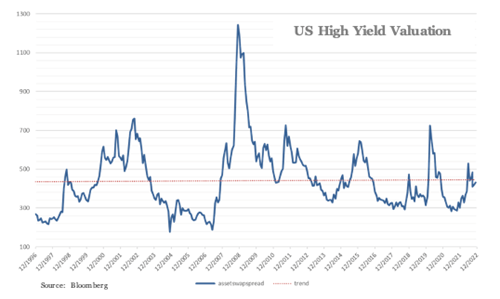 Riskier buckets, such as the high yield segment, while displaying strong fundamentals, don’t look attractively priced, especially envisaging a recession. In both the U.S. and Europe, the default rate is still very low, but not surprisingly it is rising, and the situation should deteriorate as the economy decelerates. Despite a cloudy outlook, credit spreads are tighter than the long-term average, and thus the yield on these issuers doesn’t compensate investors for the risk they underwrite. This is also true compared to investment grade bonds, reinforcing the case for preferring the latter, as the yield offered standardized per unit of duration (when looking at the asset class as a whole) is approaching the lows of the past 15 years. Similarly, emerging markets debt, while offering attractive yields in absolute terms, is not yet priced at attractive levels if compared to safer investments, especially considering the geopolitical turmoil affecting many of these countries.

In the eyes of Mr. Powell and his fellow colleagues, financial conditions must remain tight for some time, certainly more than what markets are currently discounting.

Admittedly, judging by the performance of stocks into the new year (US equities +4%, European equities +7.5% as of the 17th of January, in local currency), the consensus has a different view compared to what we have outlined so far. Most of the move can be explained by the retracement of interest rates from the highs of the past months (lower interest rates are positive for stock prices because future earnings are discounted at a lower figure). Nonetheless, we truly believe that with interest rates at 5%, a) investors are paid to wait for better entry points, and b) it will not be long before the demand for goods and services cools and company earnings fall. In fact, earnings estimates have already begun their descent, driven by a contraction in profit margins that brings the latter just below a 20-years high. Adding fuel to the fire, analyst expectations are still too high if compared to the average earnings cut during a recession (15% to 20%), which makes it easier for companies to disappoint during the upcoming earnings seasons.

Exiting a year where US equities have lost roughly 15%, one may think that valuations have become attractive again…unfortunately, we have only cleared the excesses. In fact, valuations have ticked back up given the recent rebound in equity prices and are still far away from the definition of attractive. Thus, with a recession looming and expensive valuations, a prudent stance is the least an investor can adopt today. Europe and China, on the other hand, while facing severe challenges of their own, may benefit from on-sale prices; albeit it won’t be enough to prevent further losses, it should set a floor for them. 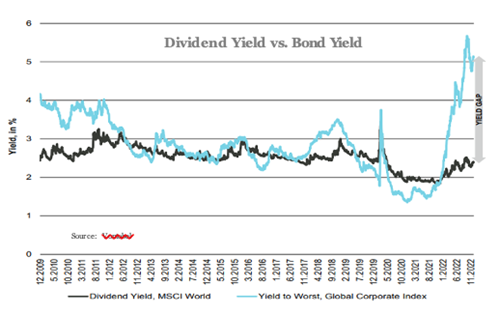 We would like to conclude this section by estimating where we currently are in the business and market cycle. We are approaching the end of the former, where economic output points to the bottom, demand begins to fall, and monetary policies soften (i.e., plateau). This should translate into credit spreads widening in the fixed-income space and, more importantly, further downside risks in equities. But it does not necessarily mean we will close the year in negative territory; it means we may need to hold our breath a bit longer before we find ourselves out of the woods.

COMMODITIES AND CURRENCIES: underinvestments to the rescue

As the world economy slows, the prices of cyclical commodities have fallen. We expect this trend to continue but the low stock levels of many commodities, including oil, should put a floor to how low prices can go and may act as a springboard when the economic cycle picks up again. Conversely, gold should be past its time in the spotlight.

The USD has been suffering over the past few months due to the narrowing of the yield gaps between US Treasuries and other developed markets' government bonds. We expect the greenback to stabilize at current levels, as opposing forces come into play; during the initial phase of a recession, the USD is sought after as a safe haven, while at a later stage, it depreciates due to easing monetary policies. The EUR may have more room to run on the back of further rate hikes, while the CHF will remain supported in case the recession is deeper than currently forecasted. However, purely on valuation matrices (which often only hold in the long term), it is less of an opportunity. 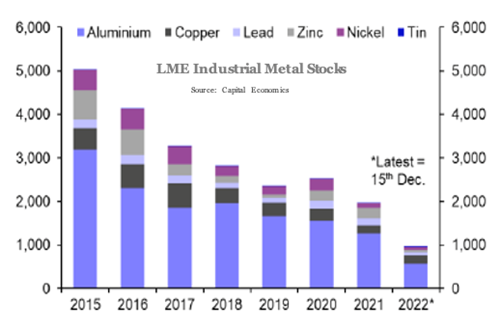