The Most Widely Anticipated Recession of all Times? 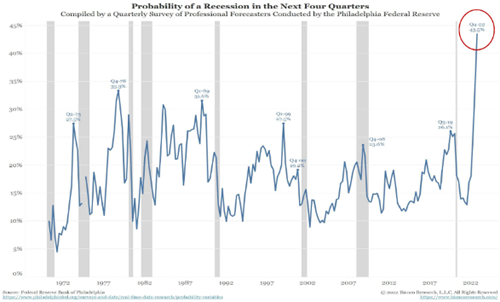 One of the main indicators of a future recession is the inversion of the US government bond yield curve (i.e. when long rates are lower than short rates), which is now significantly inverted in all its segments: 5Yr minus 3Yr, 10Yr minus 2Yr and 10Yr minus 6Mo. Analysing the graph of these different measures of the yield curve, it shows that a recession similar to that of ’90-’91 or ’01-’02 is highly probable. Also, other coincident and leading indicator, as the ISM (Institute for Supply Management, a monthly indicator of U.S. economic activity based on a survey of purchasing managers) or PMI (Purchasing Managers’ Index, an index that summarizes whether market conditions, as viewed by purchasing managers, are expanding, or contracting), are pointing to an economic slowdown, and for those reasons Equity Market have already discounted a mild recession. The occurrence of a “traditional recession” can also be seen from a chart illustrating that investors are discounting an aggressive easing by the FED from 2H’23, but the likelihood of a more significant slowdown is not yet priced in; in fact, the probability of observing the FFR (FED Fund Rate) below 2% before the second half of 2024 is only 17%, this means that investors do not expect an overly violent recession that would force the FED to speed up the rate cut to revive the economy. The real impact on Equity Markets will be seen in the coming months when we better understand the intensity of this recession and the extent of the earnings revision. Historically when FFR is greater than 2Yr Yields stocks market tend to be higher 12 months after, but with a high variability of result. Instead, on the bonds side, historically when the FED pauses hiking rates, 2Yr Yields falls by 100bps, making short duration Investment Grade bonds the most attractive area, in our view. To support our thinking, we show a graph illustrating the relationship between HY and IG Yield and Spread in Europe. It is evident that IG have discounted a mild to normal recession, while HY are not compensating for the higher risk investment.

Other facts in our favour are the solidity of the balance sheet of corporates that took advantage of the low rates before the end of 2020 to refinance and move maturities forward. Moreover, for the first time since ’10, earning yields are lower than IG corporate bonds yields, this means that now equity does not compensate investors for the higher risks related to growth uncertainty and therefore it is safer and more profitable to invest in bonds. We see an opportunity, for those who want to add more risk to their investment, also in corporate hybrids bonds, which currently yield ca. 8%.

Returning to the equity side, the rally of the last two months from the lows was mainly driven by the expansion of multiples dictated by a slight decline in interest rates. As mentioned above, the earnings revision will be decisive in determine the future direction of the market. Now it is “optimistic” relative to historical cycles, in fact, if the EPS trajectory will follow current expectations for ’23 it would be the first time that we will see earnings growth after an initial recessionary phase discounted by the market. For us, this market’s expectation is too positive, we think we will face a heavier revision justified by the following charts:

In the United States, the personal savings rate fell to its lowest level since 2005 and consumer credit use rose to its highest level since 2011, US households have compensated lower real income due to inflation by tapping into savings and credit. This dynamic is not sustainable in the medium term, so we think we will see a reduction in consumption next year that will impact EPS. Furthermore, due to rising rates, house prices have started to fall, and this will generate a negative wealth effect as can be seen from the chart below. 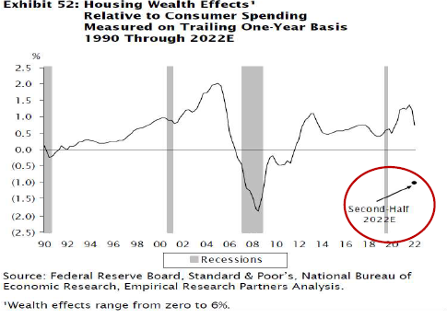 Relative to fair value of S&P, assuming current data, our models suggest us that the range is between 3800 and 4300, the probability of a recession scenario next year is around 70% and the ultimately bottom could be in area 3100.

To conclude, we think that short term is still in positive momentum given the PMI, inflation trend and possibility that the FED may be towards the end of its hiking rates, while in medium term there is still the risk of deeper estimates cuts due to the depth of ensuing recession. Specifically, we believe that IG and corporate bonds give compelling opportunity thanks to the richness in spread and in shorter duration bucket, while we could see pressure on equity in Q1 and at the beginning of Q2.