Our view on inflation, interest rates and sovereign bond

In this article we will take a brief look at two main topics: the connection between inflation and interest rate in Q2 2021 and the sovereign debt situation in Europe and China.

Over the last few months the link between the global energy crisis, inflation and interest rates became more and more blurred and many analysts and commentators are confusing cause and effect or even worse correlation with causation. Nonetheless, if we look closer, the real factors that affect the current energy price spikes stem from the global logistic disruption and the supply dynamics, all deriving from the contingent pandemic situation.

As we can see from the graph above, the energy prices are rising steeply especially from the second half of 2020 consequently, this surge leads inevitably to higher inflation. The real question though remains if this prices condition will persist and will affect inflation expectations, and the clear answer is, it depends. What we can claim with a certain degree of trust is that commodities prices will not continue increasing at this pace and thus the real impact on inflation will be more and more mitigate.

The graph above shows exactly what we just stated, that is a surge in the inflation rate especially starting from the beginning of 2021 due to the rise in energy prices. With Germany and Spain reaching 4% inflation rate, followed by the other countries there are no sights of slowdown at the horizon. Will Central Banks get tested by investors? By this, we wonder if investors will question whether Central Banks are falling behind the curve and have let the inflation genie out of the box; time will tell. 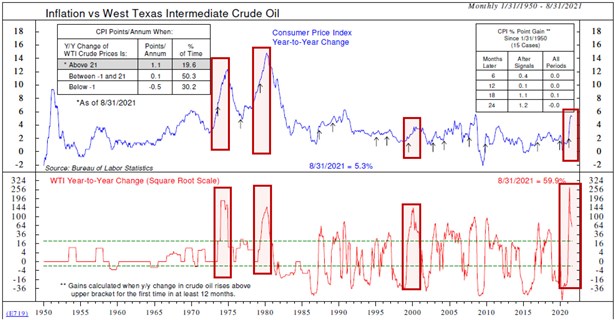 Moreover, we can clearly see a positive correlation between crude oil price increase and inflation, more precisely, steep and sudden rise in crude oil price brings about CPI to double over a short period even though it will reverse to the price mean over time. Once the rise in oil prices has transmitted its effects through the economy, we’ll be left with a higher level of prices that consumer will have to bear. If household incomes will continue growing it will not be problematic.

In the graph below there is a neat representation of what happened in some extreme conditions where the link between US 10 Years Yield and the US CPI strays from the common logarithmic relationship. 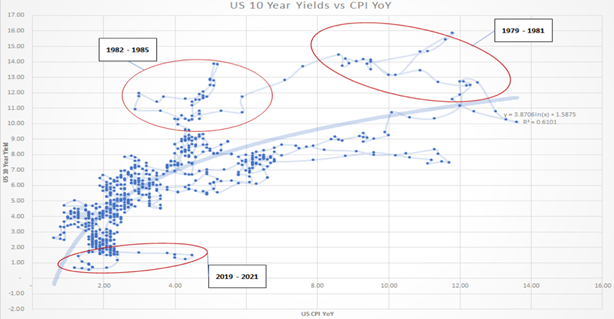 We can see that in tumultuous times (for instance the 1979 second oil crisis) the Log relation fails even though it normalizes over time dropping out mean values on the curve. It is interesting noticing that the current pandemic situation steered the relationship out of the Log curve underlying a condition of low interest rates and increasing inflation, so the future level of interest rates will depend on the persistency of inflation over time. Our guess is that, once everything will normalize, 10-year yield will settle between 2.0% and 3.0%, still a big rise from here and Bond portfolios with Long Duration will suffer from this scenario.

Another important information comes from the CLIs Breadth, where the indicator is surging over its mean (100) claiming that OECD economies are expanding simultaneously getting over the pandemic contraction.

This should imply value to outperform but manufacturing is losing momentum favoring growth. Everything will depend on whether rates keep on climbing from current levels and at what rate of speed. Deepen the question, we can state that the market is currently split into two opposite sides in relation to the interest rates. From one side, we have the High PE Growth Stocks that are negatively correlated with 10-year yields (their prices fall when interest rates rise) and in the other camp we have sectors like Banks and Financials that are positively correlated with rates, selling at extreme discount to the market. A balanced portfolio allocation between growth and Banking stocks is our preferred choice until we get a clear picture on the direction of long term rates.

It is clear from the graph above that as rates go up, growth stocks tend to underperform thus financials (such as banks) represent the “perfect hedge” for a rising rate environment given the positive correlation with interest rates.

Now let’s dive into our second theme, which is the sovereign debt situation in Europe and China. 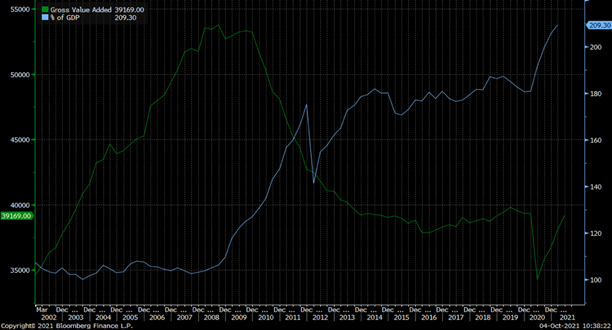 This graph depicts what at a first glance appears a risky situation, more precisely it shows the Greece Debt/GDP ratio has risen since 2009 and meanwhile GVA has been stagnant since 2013, however we do not think we are about to face a New European debt crisis. Our sentiment is strengthened by the following graph: 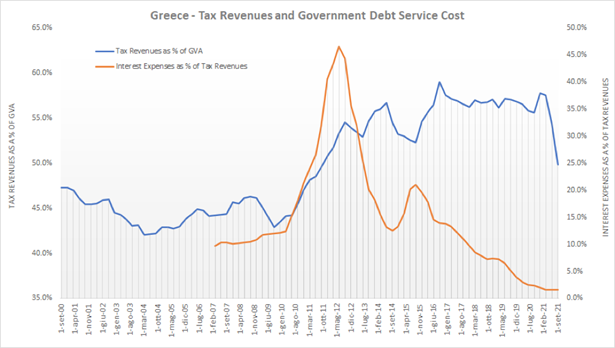 Above it is crystal-clear that when interest payments as a % of tax revenues pierced the 15.0% threshold (during the Euro Debt Crisis of 2010), Greek debt sustainability got out of control. Even though debt levels are higher than before, 10-years Greek interest rates would need to rise above 7.18% from the current 0.85% level, something that is not likely in our opinion, see chart below: 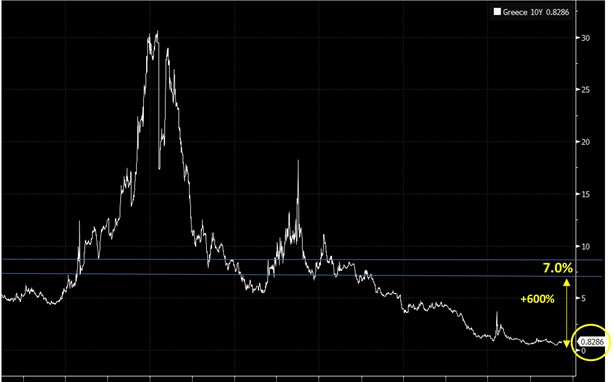 In order to cross the critical level of 7.18% the 10Y Greek interest rates need a shock of some sort to increase +600% and thus break the barrier of 7.18%, investors have been correct so far downplaying the risk of another debt crisis.

Finally, we briefly focus on what we call the “China Syndrome”. Over the last decade the Chinese property market got more and more significant, and its weight became relevant; it now represents circa 2.0% of world GDP and if we compare it to the American one we notice immediately that the former overcame the latter. More importantly residential investments now represents 10% of Chinese GDP; if it were to spiral out of control, it could pose a serious threat to the Global economy; Chinese authorities are well aware of the situation.

The Chinese government has the difficult task of letting the air out of the balloon without unwanted consequences, particularly because land sales are the primary source of local government Financing (chart below right).

Finally, as we have shown below, a centrally run economy that has mostly borrowed from itself has more time to fix the issues discussed above. Investors have been getting nervous about China since the trade war began but, unless we get a turn for the worse, valuations spreads are favoring an exposure to China or China-related investments (along with continental Europe).