Are Governments fighting the old war?

If we look at the two charts below it is self-explaining that, after the big decline due to the initial development of the pandemic, equity markets have not continued following the trajectory of daily new infections. The massive monetary and fiscal stimulus that was put in place in a noticeably short time has helped, but this is not the only explanation, in our opinion. 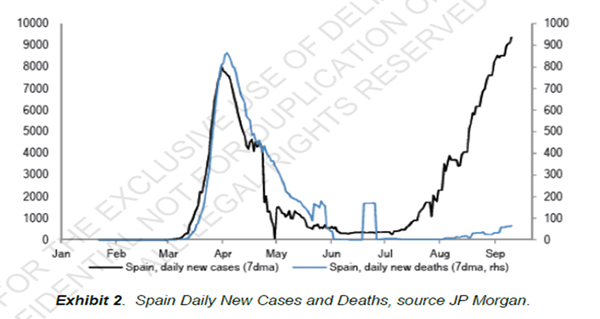 Investors have treated the pandemic like a natural disaster (similar to hurricane Katrina) which caused massive economic damage but was not triggered by a financial imbalance like a “traditional recession”. Economic output and employment recovery were much quicker after a natural disaster than the great recession of ’08-’09 (picture below). During a  financial disequilibrium induced recession, unemployment keeps rising for a considerable period due to the increasing number of people becoming long term unemployed; during a natural disaster-induced recession, unemployment increases temporarily and previous economic trends resume quickly causing employment to recover. 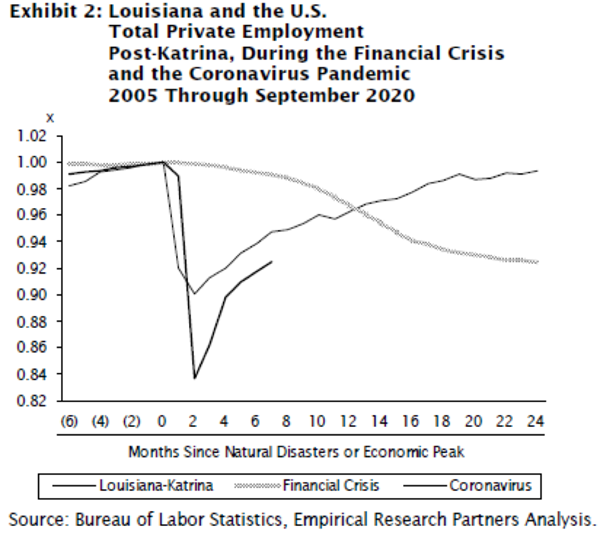 Currently, US households have managed to increase savings by an incredible $300Bil since the onset of the pandemic, thanks to the fiscal stimulus and to the fact that many of the services were not available during the lockdown. Corporations have cut costs and capital expenditures and now we are in an unprecedented situation, with consumers and corporations Free Cashflow as a share of GDP that has never been higher; this will provide additional strength to the ensuing recovery. 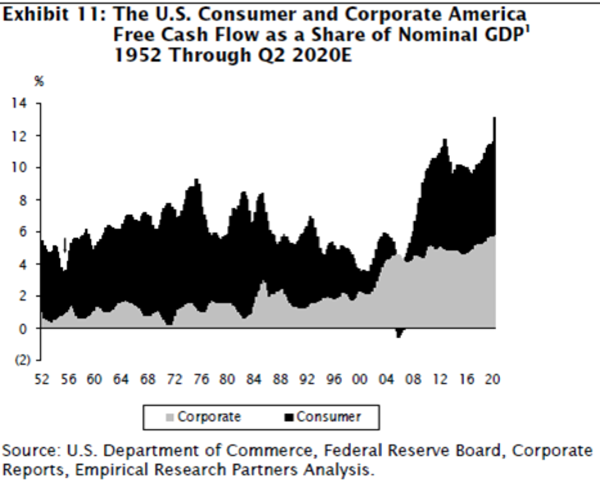 This may prove that Earning estimates for 2021 may be too conservative, especially if a vaccine is approved fairly soon; currently, there are 27 vaccines between Phase 2 and Phase 3 clinical trial, making such an occurrence highly probable. An approval will remove a lot of uncertainties around the timing and speed of the recovery. The removal of such uncertainty will probably trigger some steepening of the yield curve as inflation expectations and 10-year US interest rates have diverged (picture below).

If this were the case, Corporates should outperform government bonds as credit spreads have still room to compress significantly. Investors are still demanding a significant risk premium to Government bonds (ca 265bps, picture below) due to the risks described above. 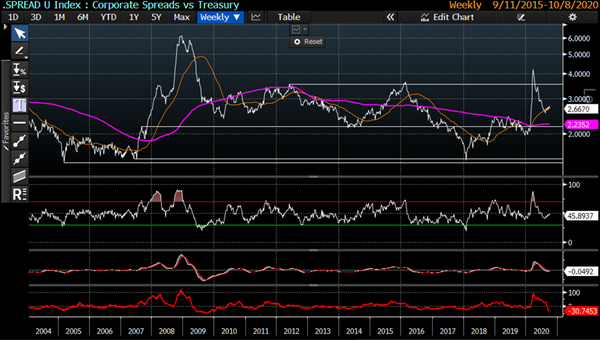 Our measure of Implied Equity Risk Premium stands at around 4.8% for the US market, Europe is slightly higher, making the stock market more interesting for the medium term. The European market has a higher implied ERP because of the lower percentage of growth sectors like Technology, Consumer Discretionary, and Health Care (picture below) and a higher percentage of Value sectors. Those sectors not only have grown faster over the last 5 years but also with lower volatility – this can be seen from the below chart that depicts the risk-adjusted revenue growth divided by sectors and regions. Here again, the US has an advantage.

In a world that is growth constrained by the pandemic, Growth Stocks are the only game in town; the approval of a vaccine may temporarily change market leadership, but the dominating Newsline is another round of lockdown across Europe, which will continue benefitting Growth Stocks.