Dissecting COVID-19 impact on earnings and the US market

With all companies in the US having reported their 3Q earnings, it is now possible to analyze what was the impact of the pandemic “first wave”. Looking at 2Q numbers would not have been as insightful as 3Q because most of the economic activity had been shut down during the “first wave”.

In raw numbers, S&P500 companies have reported a decline in sales of $54.3Bil or circa -1.71%, but worse the yearly decline in EBIT during the 12 months ended in 3Q’20 has been -23.1% or $392Bil. These figures are important for a couple of reasons: at face value, it looks like companies had a big operating leverage hit to profitability, but a more detailed analysis reveals that only a handful of sectors have been hit hard, while the majority have managed to go through 3Q unscathed. The third and most important aspect is that the S&P500 is not as representative of the economy anymore. Companies belonging to the S&P500, particularly those that now contribute to most of the earnings and free cash flow generation, have business models that are truly “Global” in nature are diversified across different sources of income and are “resilient” to shocks like the one experienced in 2Q’20.

As a matter of fact, 82.3% of the Operating Earning decline of the S&P550 has come from just 4 industries:

But more importantly there were three sectors that actually delivered positive EBIT growth of +14.4%: Food and Food Distribution, Software and Internet & Internet Media. Food Distribution have managed to post growth as they were not closed during the pandemic, while Software and Internet growth is a testament to both the resiliency of their business models and the changes that are happening in the way we and the economy operates.

The below chart displays the Industry contribution to EBIT growth during 3Q’20; as it can be seen from the bars on the chart, only a handful of industries were responsible for the majority of the decline. 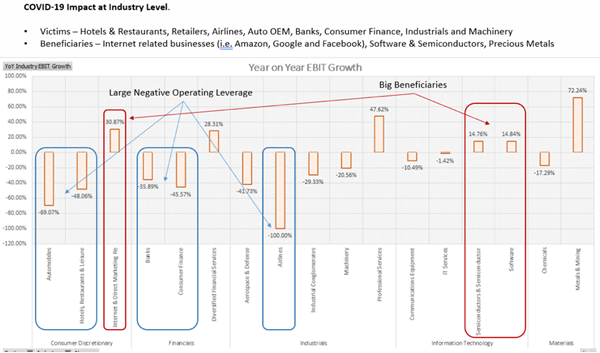 The above chart shows the percentage decline in EBIT during 3Q’20. It is evident, in our opinion, that the pandemic has hit some sectors disproportionally and left others unscathed. Its effects resemble more those of a natural disaster than a more “traditional” recession, which are generally induced by imbalances in the economy and not by an external shock like during 2020. Given that in the economy there are no big financial imbalances that were created during the previous economic expansion, it is highly likely that the ensuing recovery, especially now that a vaccine is withing striking distance, will be much stronger than currently expected. The sectors most affected by the crisis will rebound vigorously and the ones that were untouched will continue growing “as usual”. As can be seen from the below chart, private employment in the US economy has behaved more like during the Post-Katrina hurricane than during the financial crisis of ’08-’09.

Given the massive Fiscal and Monetary stimulus that has been put in place during the pandemic and the large operating leverage that exists in the hardest hit sectors of the economy, it is our opinion that earnings estimate for 2021 will prove too conservative. As per the cart above (right), current estimates for 2021 are already at the same levels they were in 2019. It is our opinion that these estimates will be handily beaten if current recovery gains strength. Central Banks will prefer to err by letting inflation run above target if it were to pick up over the next few quarters; it is not our central assumption that inflation will increase in the near future due to continue slack in capacity utilization, the deflationary impulse coming from massive technology adoption in the economy and of course from China. It is probable that interest rates will stay low for the foreseeable future.

In this environment Equity will continue being our preferred asset class, but we believe that the change in leadership, that begun post the US presidential election, will probably continue into 1Q’21.

The adage “Markets climb a wall of worry” can be seen from the char above left, where the Coronavirus Outbreak has brought economic uncertainty to unprecedented levels, generating low expectations for the global economy. Secondly, valuation of Growth relative to Value Stocks has reached an extreme level during 2Q; now that the global economy is recovering the relative price investors are willing to pay for “Certainty of Growth” will be lower in the near term, giving Value an hedge to Growth.